Top 10 of the Decade: Biggest Moments for Toronto Sports Fans 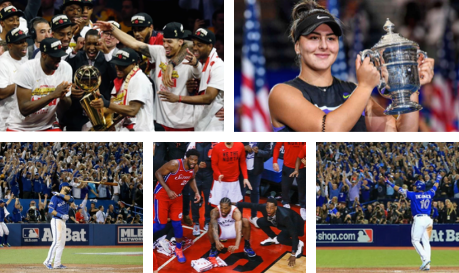 This goes without saying. After a 26 year championship drought in the four major sports, the Raptors won their first ever NBA Title on the back of Kawhi Leonard, Kyle Lowry, and an incredible supporting cast led by emerging superstar Pascal Siakam. The first win by a team based outside the United States, it was an absolutely electrifying 2.5 months capped off by a parade for the ages.

Just a few short months after the Raptors captured the hearts of all Canadians, Bianca Andreescu became the first Canadian to win a Grand Slam singles title at the 2019 US Open. As a teenager! What’s more? She had to defeat the greatest of all time, Serena Williams, to do so. While Serena nears the end of her illustrious career, Bianca’s is just beginning.

The Bat Flip heard around the world. A true “where-were-you-when” moment. Bautista’s homerun to cap off the 7th inning of game 5 of the 2015 ALDS - one of the wildest innings in playoff history - was the biggest Blue Jays moment since Joe Carter’s walk-off in 1993. A little over four years later, has the bat landed yet?

Even if the Toronto Raptors didn’t win the Championship, Kawhi's buzzer-beater in Game 7 vs. Philadelphia in Round 2 of the playoffs would have been remembered as the biggest single shot in Raptors history. With zero seconds left on the clock, the bounces, the crouch, the silence. A truly unbelievable moment.

If not for Bautista’s bat flip, Edwin’s walk-off in extra innings of the 2016 Wild Card game would have been the Blue Jay’s signature moment of the 2010’s. Needing only a single or sac fly to win it, Edwin demolished an ill-placed fastball to deep left field to win a one game, winner-takes-all matchup between division rivals.

In the summer of 2018, the Raptors fearless leader - Masai Ujiri - made the most difficult and risky decision of his career: trade the most beloved and accomplished Raptor in franchise history – DeMar DeRozan - for a top 5 NBA talent, albeit one with injury concerns coming off a season where he played less than 10 games. Despite only playing one season in Toronto, the gamble paid off. Banners fly forever.

Drafted 1st overall, the expectations for Auston Matthews in the centre of the hockey universe were sky high. With the pressure of an entire fan base watching his every move, Matthews did not disappoint in his first career NHL game as he registered four goals in a historic debut.

When Tim Leiweke took over as CEO of MLSE - the owner of the Maple Leafs, Raptors, and TFC - he made it an immediate priority to invest in the MLS club, recognizing the enormous soccer market in the GTA. A few short years later, with a star studded roster including Sebastian Giovinco, Michael Bradley, and Jozy Altidore, the TFC won their first MLS title.

At the 2016 Summer Olympics in Brazil, Oleksiak became the youngest gold medalist in Canadian history and the first Canadian to win four medals in the same Summer Games. Oleksiak also set an Olympic record in the women's 100-metre freestyle. Not a bad debut for a 16-year-old!

The Toronto Argos won the 105th Grey Cup led by quarterback Ricky Ray, defeating the Calgary Stampeders 27-24. The 17th championship for the storied franchise was a nail biter, as they erased a 24-16 deficit entering the 4th quarter.

Can the Blue Jays and Maple Leafs follow the Raptors lead and return to glory? Can Andreescu and Oleksiak continue their historic start to their careers? Here’s hoping for more success throughout the 2020’s!